WHY DO FOOLS FALL IN LOVE -Proper Secrets

In Proper Secrets by author Rachel Francis, Emily Worthing is a strong-minded, practical country lady, determined to stay unwed in an effort to protect her independence. But Emily’s resolve is challenged when she meets the charming and aristocratic Elijah Wingrave.
“Proper Secrets is both a homage to Jane Austen and a comment on the virtue of balancing emotion with common sense,” Francis says. “I wanted to create a sensible heroine, one somewhat like Elizabeth Bennet, who could illustrate the pitfalls of prejudice and the value of love rooted in trust.”
When the Wingraves move into Reddester Hall, Emily and the Worthings find themselves growing attached to a family that won't allow anyone close enough to uncover the secrets they’ve tried to leave behind. The Wingraves' troubles follow them to Tripton when Jude Annesley appears. Rife with depravity and disorder, Annesley is unable to fool Emily with his false charm. He plots a course of revenge that will strip away all pretenses, leaving none of the Wingraves’ secrets intact.
Proper Secrets is not a traditional historical romance. It’s set in an “alternate Europe,” and though it’s reminiscent of the Regency England period, Francis takes liberties with many of the factual aspects of the book. She plays with the geography, the social climate and mores, current events, and technology available at the time.


“I wanted to create a new environment, one that could help me express the themes that are central to Proper Secrets,” Francis continues. “My experience with the military helped me develop this world. An alternate Europe, especially one that featured England at war, would not have come across as genuine without the knowledge I gained while living on the Camp Pendleton military base.”
Proper Secrets is character-driven fiction with an important message centered on truth, consequence, and love. It explores themes that will resonate with today’s readers, including:
“Today’s unrealistic view of love often encourages people to do not what is best for them, but the complete opposite. Women try to emulate the relationships of couples like Bella and Edward and make themselves miserable in the process,” adds Francis. “Emily learns that while it’s difficult to choose not to indulge in a fantastic, unstable love, it motivates Elijah to grow as a person and overcome their barriers by doing the right thing.” 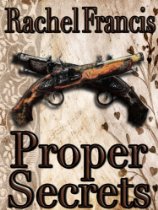 
Author Rachel Francis attended Wright State University and completed Holly Lisle’s “How To Think Sideways” course for writers. As a writer, Francis says her mission is to capture humanity as she experiences it now and what she hopes it could be in the future. She lives outside Dayton, Ohio with her family.
Proper Secrets is Francis’ second novel. It’s available in paperback ($14.99) and eBook ($4.99)
For more information, visit www.rachelfrancisbooks.com or connect with Francis on Twitter @RachelFrancis22.

Posted by Everyday Living® at 7:28 AM