Grilling myth #1: Marinating meat adds both flavour and tenderness to meat. The truth is, it depends on what’s in the marinade. Some marinades can actually toughen meat. So what’s the one magic ingredient that flavoursand tenderizes better than any other?
Here’s a challenge to throw down to anyone who likes to brag about his secret barbecue sauce. When it comes to grilled perfection – it’s not just about the spice blend. Contrary to what many people think, spices don’t tenderize. There are really only three ways to tenderize meat, and only one of them also helps carry flavour deep into it. 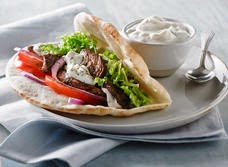 The squeeze of lemon, the shot of vinegar, the big glug of wine: all create an acidic marinade that can be tenderizing, as long as you don’t overdo it. Too much acid, and the protein molecules in your meat will start to toughen. Shrimp are famously easy to toughen in this way, so easy does it. (About one part acid to 4 parts oil.)
A second family of tenderizers owes its action to a specific type of enzyme. Pineapple, papaya, and ginger belong to this family, and can also add delicious flavour to a marinade. But the tenderizing action is very intense, and can actually give meat an unpleasant texture if you use too much, or marinate things for too long.

The magic of dairy

One famous chef gave two marinated chicken breasts an MRI scan: one marinade contained yogurt – the other didn’t. The scan showed that the yogurt-based marinade went deeply into the meat, while the one without yogurt hardly penetrated the surface. What’s yogurt’s secret? No one really knows, but it’s thought that the calcium in yogurt interacts with the proteins in the meat in a way that’s tenderizing. Because it’s similar in many ways to yogurt, buttermilk is also a good tenderizer. Buttermilk is what makes traditional Southern Fried Chicken so tender and succulent.

The wisdom of ages

Yogurt has been used for centuries as a tenderizing marinade in the cuisines of India, Iran, Turkey, Greece, and North Africa. If your mouth waters at the mention of these regional styles of cooking, you’re probably thinking about their characteristically fragrant and flavourful spice blends. Spices ‘bloom’ in yogurt, in the same way they do in hot oil. And since the yogurt also penetrates meat very effectively, it’s the perfect vehicle for delivering the flavour of spices into steaks, chops, fillets, poultry, and skewered meats of almost any kind. You can use virtually any mix of spices and seasonings, or take inspiration from these classic combinations:
Indian tandoori style: garam masala + saffron + ginger + garlic
Greek style: oregano + garlic + lemon
North African style: ras el hanout + harissa + paprika + preserved lemon + garlic
Indonesian satay style: Turmeric + coriander seed + lime zest + ginger + garlic + chile
Don’t forget the salt and pepper! You only need a light coating of seasoned yogurt to make a really delicious and effective marinade. Using re-sealable plastic bags allows you to maximize the contact between the marinade and the meat. Things like shrimp and delicate fillets should only marinate for about 45 minutes – other meats can take between 4 and 12 hours. It really depends on thickness and density.
And the limit to the flavour combinations you can create in the pursuit of perfecting your own signature yougurt-based marinade really only depends on your imagination.
Posted by Everyday Living® at 9:08 AM