TORONTO, ON (September 12, 2011) – After the Cartoon Network debut of their first-ever original television special, The LEGO Group and Lucasfilm will join forces once again to bring LEGO Star Wars: The Padawan Menace to Blu-ray Disc and DVD. Launching on September 16, the 22-minute original standalone special will feature the charm, action and irreverent humor that have become the signature style of LEGO Star Wars animation collaborations and will include five LEGO Star Wars shorts, as well as an exclusive, collectible minifigure. 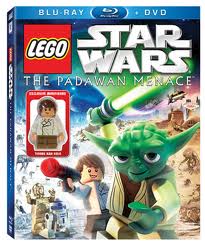 Featuring situations, characters and locations from throughout the entire Star Wars Saga, the original adventure is written by Emmy Award winner Michael Price (The Simpsons) and produced by Oscar-winning Animal Logic, the production company behind Happy Feet.


To date, Star Wars is the first and most successful LEGO licensed product collection in the company’s history, generating more than 200 LEGO models and approximately 275 LEGO minifigures inspired by the Saga, which has also spurred a blockbuster collection of videogames, selling 25 million units to date worldwide. In addition to its popularity among younger fans, a significant portion of the LEGO Star Wars consumer fan base is made up of adult fans and franchise collectors.
BONUS MATERIAL :
· Hunt for R2D2
· Bombad Bounty
· Star Wars in Two Minutes (Part 1)
· Star Wars in 2 Minutes (Part 2)
· Star Wars Clone Wars In Cinema

A routine Jedi Academy field trip is turned into a rip-roaring comic adventure in LEGO Star Wars: The Padawan Menace. Tour guide Master Yoda leads a group of rambunctious Jedi Younglings through Senate chambers when he senses a disturbance in the Force. Summoned to help save the Republic, he discovers that one of the Younglings secretly boarded his ship…and has a taste for adventure! Meanwhile, C-3PO and R2-D2 are put in charge of the boisterous group and find themselves in over their heads. As the evil Sith prepare to wreak havoc, it’s up to Yoda and the Droids to ensure that their young charges aren’t torn to bricks!
Lucasfilm, Star Wars and related properties are trademarks and/or copyrights, in the United States and other countries, of Lucasfilm Ltd. and/or its affiliates. TM & © Lucasfilm Ltd. All rights reserved. All other trademarks and trade names are properties of their respective owners.
LEGO, the LEGO logo, the Brick & Knob configurations and the Minifigure are trademarks of The LEGO Group. ©2011 The LEGO Group. All rights reserved.
Posted by Everyday Living® at 5:48 AM