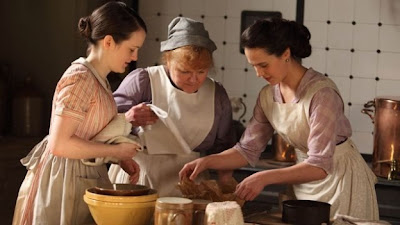 If you’d like to try your hand at some Edwardian-era cooking, here are three recipes typical of the period...

Half tsp salt and pepper

Melt fat, add onion and fry until brown. Add the tomato, seasoning and meat and heat through. Grease a baking dish, put in a layer of the cereal or potato, add the meat and gravy and cover with cereal or potato dotted with fat. Bake for half an hour. As made by Ivan Day .

Half cup of dried breadcrumbs

Mix and shape as sausage. Roll in flour and fry in dripping.

Soak half the meat, cut into small pieces, in the quart of water for one hour. Heat slowly to boiling point. Season the other half of the meat with salt and pepper, roll in flour and brown in 3 tablespoons of fat with the onion. Add to the soaked meat, which has been brought to boiling point. Cook for one hour or until tender. Add the vegetables and flour mixed with half a cup of cold water. Cook until the vegetables are tender.

From Foods That Will Win The War And How To Cook Them by C. Houston Goudiss and Alberta M. Goudiss (1918).

Visit the Downton Abbey website:  http://www.itv.com/downtonabbey/
Posted by Everyday Living® at 7:03 AM